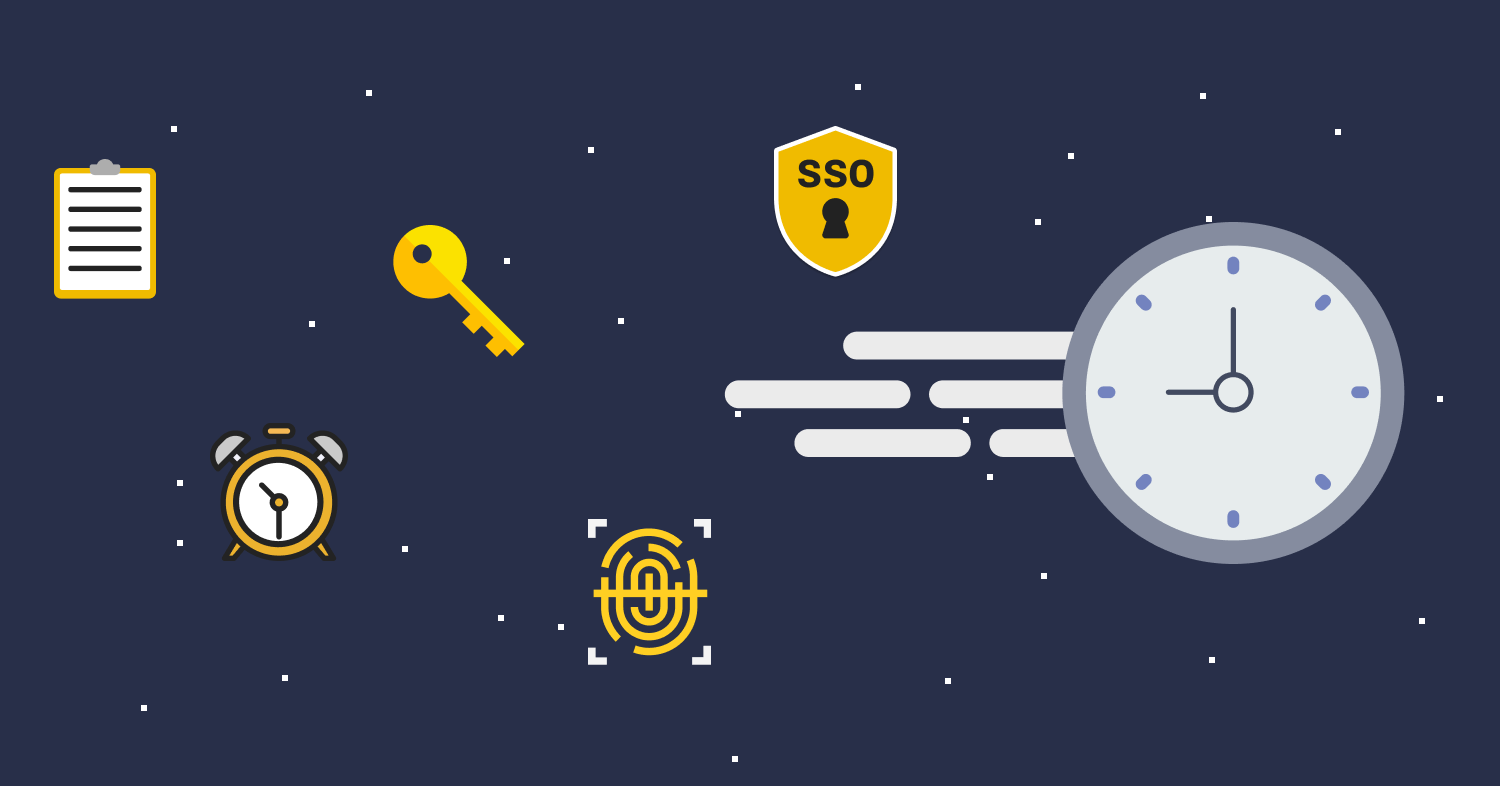 A Developer's History of Authentication

Authentication is the act of verifying someone’s identity. It’s confirming they are who they say they are. In analog form, it looks like a written signature, social security number, and passport.

The history of digital authentication spans just 60 years, but things have progressed (really) quickly. As technology has developed and more personal data is kept on servers and in the cloud, digital authentication becomes necessarily complex. What began as plaintext passwords used only in elite government and academic settings is now face-scanning infrared technology in the pockets of millions of everyday people (i.e. Face ID).

How did we get here so quickly? Authentication has grown through iterations and the hard work of many brilliant computer scientists, often in purely academic settings. Join us as we walk through the fascinating history of authentication from a developer’s point of view.

Authentication through the ages

The origin of computers is a topic of endless debate. When you break it down, computers are machines that compute so there are many points where you could reasonably say “There, that’s the first computer.” The prospect of defining an exact start point gets even more complex if you include theoretical machines, like Charles Babbage’s and Ada Lovelace’s analytical engine. For the sake of making this post article-length instead of book-length, let’s start with Alan Turing.

Alan Turing’s paper On Computable Numbers laid the groundwork for what many consider the first modern computers. In that paper, Turing proved that computing instructions stored in memory could be executed. After Turing’s paper was published, computer scientists got to work creating the first computer. Twelve years later, in June of 1948, the first electronic stored-program computer (named the Manchester Baby) ran its first program, and modern computing was born.

For many years after the Manchester Baby — also known as the Small-Scale Experimental Machine (SSEM) — came about, computers were limited to researchers and scientists. After all, computers were massive and known to fill entire rooms with tubes and wires.

By the early 1960s, some universities had a computer that was shared among all students for the use of performing calculations and research. Here is where the first form of digital authentication truly began.

MIT was one such school. Their big, slow, shared computer had multiple terminals. A program called the Compatible Time-Sharing System (CTSS) allowed students and researchers to share the computer. One student, Fernando J. Corbató, noticed that any user of the CTSS was able to access the files of any other user, and, unsurprisingly, viewed this as a fundamental weakness in the system.

In 1961, Corbató implemented a rudimentary password program for the CTSS. And by rudimentary...we mean the system prompted the user for a password and then saved it into a plaintext file within the filesystem.

Passwords were a step in the right direction, but a user could easily find where the passwords were stored and access them. In fact, that’s exactly what happened when a PhD researcher named Allan Scherr wanted more than his allotted four-hour block on the MIT computer. His greed may have made him the first hacker.

By the late 1960s, programmers knew that storing passwords in plaintext wasn’t going to cut it. Still, they had to solve the problem of how to give the system access to the user’s selected password to compare against the user’s entered password. This complicated problem was finally solved by a cryptographer named Robert Morris.

While working at Bell Labs, Morris made foundational contributions to Unix, including a password encryption scheme (based on work by Roger Needham) that determined hashes of passwords for user authentication. Essentially, the scheme used a key derivation function, which calculates a secret value that is easy to compute in one direction but extremely difficult to crack in the opposite direction.‍

Though Morris was deep into the world of cryptography, he was realistic about his expectations for computer security. He once said, "The three golden rules to ensure computer security are: do not own a computer; do not power it on; and do not use it.” Ironic, given the fact that his son became a felon for creating the first major computer worm to hit the Internet.

The next step in the journey to robust user authentication was asymmetric cryptography (also known as public-key cryptography). To understand how it works and how it got established as a cryptographic method on computers, we need to go back to the 1800s.

In 1874, William Stanley Jevons wrote a book called The Principles of Science in which he wrote, “Can the reader say what two numbers multiplied together will produce the number 8616460799? I think it unlikely that anyone but myself will ever know.” What Jevons is saying is that the reader has no idea how to decode 8616460799 without a crucial bit of information from the person who derived the number. A “key” if you will.

He essentially came up with public-key encryption way before computers were even a twinkle in a motherboard’s eye.

Jevons’ theory gives us a bit of insight into how asymmetric cryptography works. There are two keys — a public key and a private key. The public key is openly shared and acts as an identifier for the user. The private key is combined with the public key to create a digital signature, which authenticates the user.

The concept of public-key cryptography was further developed secretly by a UK government employee named James H. Ellis in 1970, though he never got it fully working. The real deal came three years later in 1973 when Clifford Cocks (a co-worker of Ellis) developed the RSA encryption algorithm, and Malcolm J. Williamson took it to the finish line by implementing the Diffie-Hellman key exchange.

As technology quickly advanced, the fallibility of passwords became more and more obvious. Users would choose easily guessable passwords or reuse the same passwords in multiple places. Eventually, as computers were built with more computing power, hackers could build programs to brute-force guess passwords. To combat this, computer scientists came up with dynamic passwords.

These passwords change based on variables, like location, time, or a physical password update (like a FOB). They remove any risk of replay attacks and solve the problem caused when users have the same password in many places. Security Dynamics Technologies, Inc. was the first company to create FOB hardware with a one-time password (OTP) for authentication.

Over time, there were two dynamic password protocols introduced:

HOTP in particular is a foundational component of the Initiative for Open Authentication (OATH), which produces industry-wide standards for authentication.

Remember how we said that asymmetric cryptography was developed in the ‘70s but kept secret until 1997? Well, when the knowledge did finally go public, it was a game-changer. In the late ’80s, computer scientists continued the work started in the ’70s and made moves to standardize it through public key infrastructure (PKI).

One of the main catalysts for the standardization work (besides finally releasing it to the public) was the World Wide Web. By the 1990s, the Internet was no longer a tool hoarded by universities and governments. Even companies had a presence on the Internet, including the infamous Pets.com.

With so much sensitive data online, beefing up authentication to know exactly who was accessing what was a must.

In 1986, a handful of U.S. government agencies (including the NSA) and 12 companies with an interest in computers developed specs for secure network communications. It was originally named the SP4 protocol and eventually renamed the Transport Layer Security protocol (TLS). In the late ’90s, Taher Elgamal — an engineer at Netscape — developed the original Secure Sockets Layer (SSL) protocol, which included keys and server authentication.

Eventually, the official PKI structure was fleshed out to define specifically how to create, store, and distribute digital certifications. Every PKI must include:

You can find many open-source implementations of PKIs, like OpenSSL and EJBCA.

We mentioned MFA a little earlier. It’s when you combine multiple types of authentication methods to verify someone’s identity, and it gained heavy traction and widespread adoption in the 2000s.

Over the years, more technologies were invented to help with MFA. For instance, instead of carrying around a FOB with an OTP, there’s an app for that (actually there are many: Google Authenticator,Duo, and Authy, for example, none of which anyone seems to rate highly on the app store). Other forms of MFA include texting OTPs to users’ phone numbers or magic links.

Companies also began to do extra security checking for added measure. For instance, have you ever gotten an email saying your account was accessed from a location or device that isn’t recognized? It could be that you’re on vacation, using a VPN, or recently cleared your cache (or nothing). This security email is just another step in verifying your identity.

Single Sign-on (SSO) was another major (and controversial) advancement made in the 2000s. SSO was formed from the idea that users are fundamentally not to be trusted with their passwords. After all, the passwords that people make up are usually not super secure, are used in multiple places, or are frequently forgotten. One study found that 42% of IT and security managers reported data breaches from user passwords being compromised and 31% reported breaches caused by users sharing their passwords with unauthorized people.

With SSO, a trusted third-party verifies that users are who they are so that individual sites don’t have to verify each set of credentials. Users log on to one website and that site checks if an SSO provider has already authenticated them. If not, it prompts them to log in; if it does recognize them, it gives them access.

The problem is that the security of the companies in charge of SSO can be iffy. Take signing up for a Spotify account through your Facebook account as an example. If Facebook is breached, any account you used Facebook to log in with will also be compromised. When using SSO, it’s important to find a company you can trust with your data.

Biometrics use biological traits, such as fingerprint or face shapes, to authenticate users. Biometrics have been around for a while, but before the 2010s, they were only used for top security personnel (and super cool spies in movies). Then, in 2011, a fingerprint scanner was added to the Motorola ATRIX Android smartphone.

Apple was a bit behind the times with fingerprint scanners. Their Touch ID came out three years after Motorola’s (yes, you remember them). But by 2017, Apple swapped out the popular feature for Face ID, which works by scanning the user’s face with 30,000 infrared dots. We generally don’t think of this kind of stuff as biometrics, but it’s working with the same DNA as the sophisticated stuff you see in movies.

Now it’s common to use your finger or face for authentication purposes when logging in to devices or completing digital purchases. Overall, biometrics are considered to be very secure. Stealing someone’s face is, generally speaking, difficult to pull off. That being said, there have been legal loopholes and technical backdoors that shake the foundation of biometrics as an authentication method.

The future of authentication

It’s hard to imagine anything more futuristic-sounding than a device scanning your face to authenticate you, but a new authentication technology is likely just around the corner. There’s talk around Silicon Valley of using heartbeat, gait or even behavior for authentication in the near future. Some companies are also using less shiny, but perhaps more practical, methods of passwordless authentication like magic links or codes through email and SMS.